Coroner’s spokesman Craig Harvey said Jackson was taking some prescription medications, but did not specify what they were.

Police seized Murray’s car the night before, saying they believed the car may contain drugs or other evidence, but have insisted that Murray has been cooperative and do not consider him a criminal suspect.

“We do not consider him to be uncooperative at this time,” said police Deputy Chief Charlie Beck, noting that detectives spoke with the doctor after Jackson’s death. “We think that he will assist us in coming to the truth of the facts in this case.”

Records reveal years of financial troubles for Murray, who practices medicine in California, Nevada and Texas. His Nevada medical practice, Global Cardiovascular Associates, was slapped with more than $400,000 in court judgments, and he faces at least two other pending cases and several tax liens.

Lou Ferrigno, the star of “The Incredible Hulk,” said he had been working out with Jackson for the past several months. Still, Jackson’s health had been known to be precarious in recent years, and one family friend said Friday that he had warned the entertainer’s family about his use of painkillers.

“I said one day we’re going to have this experience. And when Anna Nicole Smith passed away, I said we cannot have this kind of thing with Michael Jackson,” Brian Oxman, a former Jackson attorney and family friend, told NBC’s “Today” show. “The result was I warned everyone, and lo and behold, here we are. I don’t know what caused his death. But I feared this day, and here we are.”

Oxman claimed Jackson had prescription drugs at his disposal to help with pain suffered when he broke his leg after he fell off a stage and for broken vertebrae in his back.

…When Michael Jackson was on trial on child molestation charges in 2005, Jackson appeared gaunt and had recurring back problems that he attributed to stress. His trial was interrupted several times by hospital visits, and Jackson once even appeared late to court dressed in his pajamas after an emergency room visit.

After his acquittal, Jackson’s prosecutor argued against returning some items that had been seized from Neverland, the Santa Barbara County estate Jackson had converted into a children’s playland. Among the items were syringes, the powerful painkiller Demerol and other prescription drugs.

Demerol carries a long list of warnings to users. The government warns that mixing it with certain other drugs can lead to reactions including slowed or stopped breathing, shock and cardiac arrest.

Let this be a warning for people throughout the world to be extremely cautious and thoughtful before taking painkillers and prescription meds (which can be highly addictive and destructive).

My mother died prematurely as a result of alcoholism and substance abuse. In some small way I want to be a voice for substance abuse prevention and a detour for those who might drive drunk.

Invite Paul to speak in your city!  RevivingNations@yahoo.com 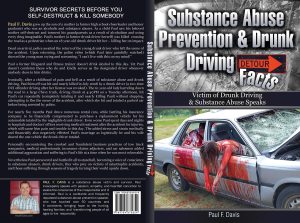 The older I get, the more I realize that I am an overcomer. Truly I must have a guardian angel. I was hit by a truck while I was riding a bicycle as a young boy and survived the accident. Numerous time in high-school and college, I was with strange, misbehaving “friends” who jeopardized and endangered my life, which I survived.

As a minister, I have traveled to war-torn nations and countries in serious conflict and passing through calamity, wherein others such as myself were martyred. Yet God graciously spared my life and preserved me from destruction.

Last year I was hit by a drunk driver on a Tuesday afternoon before 5pm (the driver received her 2nd DUI in less than two years and was imprisoned), after which my car was totaled and I nearly killed.

Nevertheless through all of these hardships I pass and continue by God’s grace to overcome. My mom was a drug addict and alcoholic throughout my childhood, she having eventually died a premature death due to substance abuse.

Then because of the torment and difficulty living with my stepmother (who I didn’t get along with until 11th grade), I contemplated killing myself at the age of 12. Thankfully, I pulled myself together and purposed to do something great with my life rather than succumb to fear, intimidation, and mediocrity.

Therefore today I am a living testimony, having passed through innumerable trials and tribulations, to stand before you today tried, tested, and free from fear and failure.

Only believe and you too will experience the goodness of your Creator and a glorious breakthrough in your life!

Turn every mess into a message; your pain into power; and your hurt to heal humanity.

www.PaulFDavis.com – worldwide speaker and life-changing author of 17 books including “Breakthrough for a Broken Heart”

Invite Paul to speak in your city!

Death of the Dollar – Avalanche of Bankruptcies on Wall Street

My suggestion is invest in gold, Euros, or the Paulson Credit Opportunities Fund (Paulson & Co. Inc.) since he just made $3 to $5 billion on the sub-prime mortgage crisis and is making all the major decisions on the U.S. economy, bringing in investors into his fund from Europe, and has Greenspan working for him.

To do currency exchange or invest online go through my forex account (same price for you, just commission goes to me): http://ads.easy-forex.com/Gateway.aspx?gid=104994

Read about Paulson, who billionaire George Soros and his brother also invest in his fund.  They got front page coverage on the Wall Street Journal. http://online.wsj.com/public/article/SB120036645057290423.html

Greenspan is one of the most astute on global financial markets and he is advising Paullson.
http://www.reuters.com/article/pressRelease/idUS136083+15-Jan-2008+PRN20080115

Amazing 60% gains for Paulson’s fund in a single month (February 2007) also come with occasional monthly losses of 3 to 5% (miniscule in proportion) so be in it for the long term and have some intestinal fortitude so as to not unecessarily panic.  I’d rather put my money with the international bankers, merger titans, and guys pulling political strings on the economy than anybody else. http://www.nypost.com/seven/05042008/business/paulsons_funds_slide_109389.htm

To do currency exchange or invest online go through my forex account (same price for you, just commission goes to me): http://ads.easy-forex.com/Gateway.aspx?gid=104994

Jean Dominique Bauby – The Diving Bell and the Butterfly

Jean-Dominique Bauby (April 23, 1952 – March 9, 1997) was a well-known French journalist and author and editor of the French fashion magazine ELLE. On December 8, 1995 at the age of 43, Bauby suffered a massive stroke. When he woke up twenty days later, he found he was entirely speechless; he could only blink his left eyelid. This rare condition is called Locked-in Syndrome, a condition wherein the mental faculties are intact but the entire body is paralyzed. Bauby also lost 60 pounds in the first 20 weeks after his stroke.

Nevertheless despite his condition, Bauby fulfilled his dream to write a book which he titled The Diving Bell and the Butterfly by blinking when the correct letter was reached by a person slowly reciting the alphabet over and over again. The book was published in France in 1997. The diving bell of Bauby’s title was his bodily confinement and limitation, the butterfly his imagination.

After fulfilling his dream, Bauby died just 10 days later of pneumonia. In 2007, painter-director Julian Schnabel released a film version of The Diving Bell and the Butterfly which won Schnabel the best director prize at Cannes, a Golden Globe Award and an Academy Award nomination for Best Director.

A remarkable and inspiring true story about the awesome power of imagination, perseverance, and dedication to live one’s dream!

Now arise, transcend your excuses, triumph over your circumstances, and live your dreams!
Bauby’s life story gives me hope to find a way to live my dreams when I have no money to travel internationally and uplift humanity ministerially as is my customary life tendency. Nevertheless perhaps like Bauby through the printed page and my writings, until I lay hold of some money, I can journey my world inwardly until I resume my travels globally.
http://www.PaulFDavis.com
RevivingNations@gmail.com